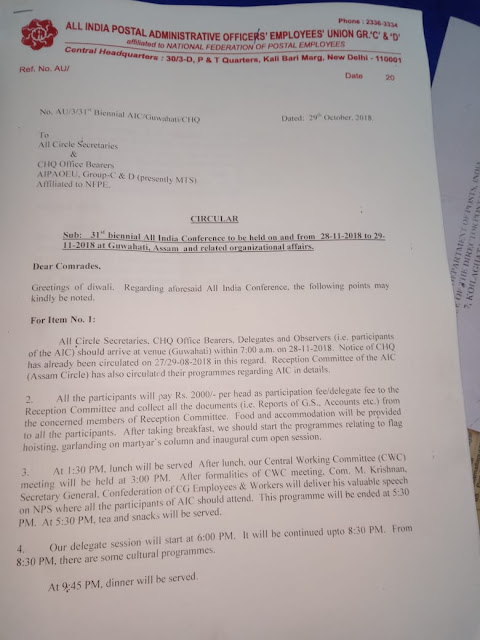 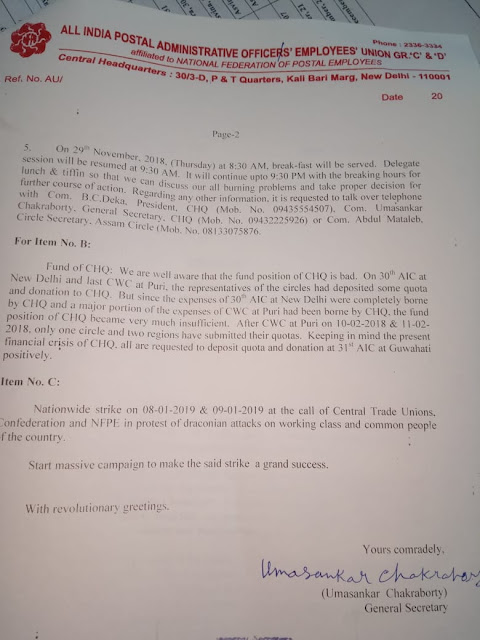 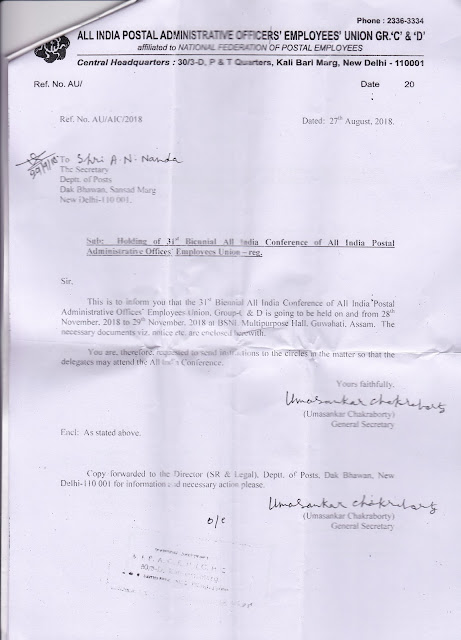 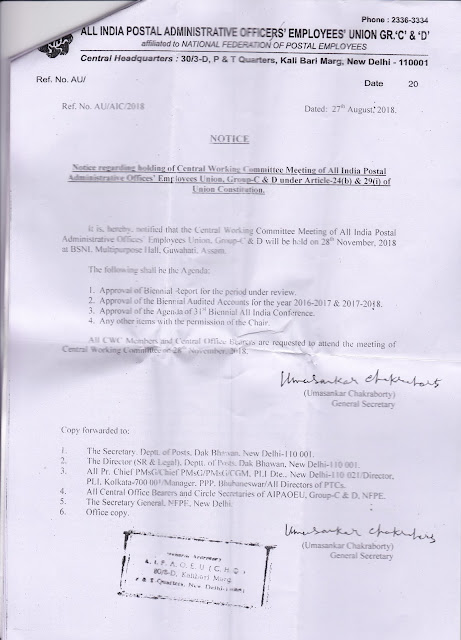 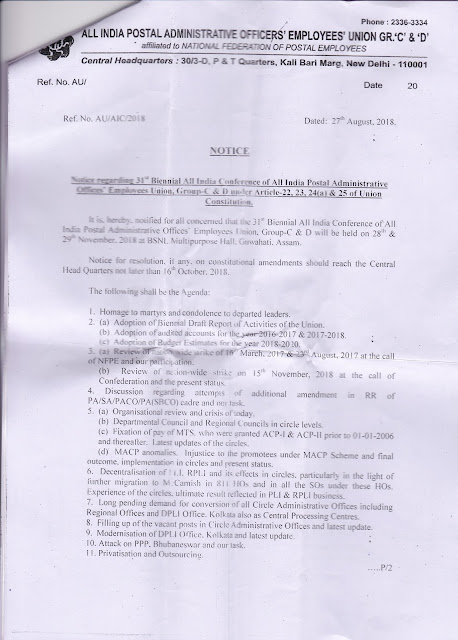 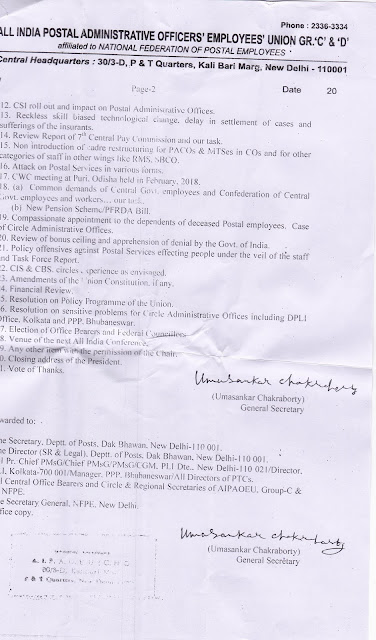 Government and Postal Board is totally indifferent. Suicides and death of GDS while on strike are reported everyday. Situation becoming out of control.Nearly 7000 GDS including 1000 ladies gheraoed and declared seizure of CPMG Office Hyderabad. Only due to the timely intervention of Ministers, MPs and MLAs of Telangana the situation came under control after five hours. More aggressive and  violent protests are being reported from various states including Varanasi and Shimla. All the Branch Postoffices remain closed for fifteen days and they have now become Branch “Ghost” Offices. The anger and protest of striking GDs is growing day by day. If the situation goes out of control and any untoward incidents happens, the Govt and Postal Board alone will be responsible. The calculation of the Officers that believing their sugar-coated appeals, GDS will resume duty on 4th June (Monday) had gone wrong.

The attempt to reach Circle level settlements to break the unity and weaken the position of All India Leadership of the striking GDS,while All India unions are on strike has also miserably failed. 99% of the Circle Unions refused to reach Circle level agreements and categorically told the Chief PMsG to discuss with their All India leadership and reach settlement at Delhi level. Percentage of the strike increased further in all states and it has reached its peak on 4th June (Monday), almost 100% in all states.

Confederation National Secretariat calls upon all its affiliates and C-o-Cs to extend full support and solidarity to the striking GDS. Don’t hesitate. Grab the seriousness of the situation and jump into action. Take initiative to form strike aid Committees at all places. Extend financial assistance to the needy GDS who are on strike. Organize various types of protest and solidarity action daily under the banner of strike –aid committee or confederation. Approach MPs, MLAs, Ministers, distinguished personalities and organizations and request them to intervene.

All GDS Unions including pro-BJP BMS Union has unanimously decided to continue the strike till settlement of their demands. Strike may prolong further due to the negative attitude of Government. GDS unions are ready to continue their struggle. There is no wavering or confusion anywhere. The strategy of the department to make them starve and then surrender has also failed.

Remember, after 1946 P & T strike which lasted for 26 days and after 1974 Railway strike which lasted for 25 days, this heroic struggle has taken place and three lakhs most down trodden GDS has did it. We should understand the significance of this strike and come forward to extend all out support. Once the bus is missed, you cannot catch it again.

NO SETTLEMENT IN THE DISCUSSION WITH SECRETARY, DEPARTMENT OF POSTS
STRIKE WILL CONTINUE
RELAY HUNGER FAST AT DIVISIONAL LEVEL FROM 06-06-2018

Today (04-06-2018) Secretary,  Department of Posts called the three striking Unions (AIPEU-GDS, AIGDSU & NUGDS) for discussion at 04.00 pm. Three GDS General Secretaries and some office bearers went for discussion. Secretary, Posts told that if the striking unions give a letter withdrawing the indefinite strike, he is ready to take them to the Minister, Communications for discussion.

Unions clearly told that the condition that first withdrawing the strike and then discussion with Minister is not acceptable to them.

To
The Secretary,
Department of Posts

It can be seen from the above that all three GDS unions have taken a reasonable and positive stand. Nobody can blame that  the  Unions are unreasonable.

All are requested to make maximum efforts to ensure 100% strike in all Circles / Divisions.

Posted by AIPAOEU.NFPE at 11:35 PM No comments:

Email ThisBlogThis!Share to TwitterShare to FacebookShare to Pinterest
“THE MORNING SHALL SURELY COME, THE DARKNESS WILL VANISH.
WHERE THE MIND IS WITHOUT FEAR AND HEAD IS HELD HIGH ……
=Gitanjali,Rabindranath Tagore

The unprecedented strike of three lakhs Gramin Dak Sevaks of Postal department will enter the 14th day on Monday. Functioning of  rural postal services has come to a grinding halt. Out of 1,55,000 Post offices, 1,29,500 rural Post offices are completely shut down. GDS are not demanding to give them the “Moon” from the sky. They are demanding their legitimate wage revision. If 32 lakhs departmental employees wage revision can be implemented within eight months after submission of Seventh CPC report, why the unjustified delay of eighteen months for implementation of wage revision of only three lakhs low-paid GDS employees? Why lamenting about the deficit of the department only when GDS wage revision comes? Are GDS responsible for the deficit? No, not at all.

Postal “Gods” and Central Government are in deep slumber for eighteen months, when poor GDs are waiting..waiting..and waiting. The strike is a natural outburst of pentup discontentment and anger of the marginalized section after desperately waiting for long. Then suddenly the sleeping ‘Gods’ wokeup. Appeal after appeal started pouring in all languages just like distributing chocolates to lure children. But 96% of GDS stood united and continued their struggle. They declared they will not surrender their self-respect and prestige, evenif they and their families are made to starve or die by prolonging the strike.

They know, many had lost their lives and many sacrificed before our country got freedom. Mahatmaji had told the Britishers “you can kill me, but you can not make me surrender”.

They know, many had lost their lives and many sacrificed before the most dreaded “apartheid” system is legally banned and abolished in South Africa. Nelson Mandela has taught them “never to give up or surrender”.

They know, many had lost their lives and many sacrificed before the “slave system” is legally abolished in United States. Martin Luther King had told them“I have a dream” and his dream had come true later.

GDS system is a “beggar system”and nothing but slavery and bonded labour. This heroic struggle of GDS will definitely mark the beginning of the end of this slave system which is a “black mark in the face of Indian democracy”. Those GDS and departmental employees (though in some states only) who participated in this historic struggle for emancipation of the most down trodden section of the society will be remembered for ever in the history and their sacrifice will never go in vain.

Those Government’s supporters in the bureaucracy are propagating that GDS unions have committed a great mistake and unpardonable crime by going on an “untimely” indefinite strike, that too all the four Unions together. We have only to remind them the old saying “when a beggar come to your house, you need not give money to him if you don’t like, but please don’t unleash your dogs to bite him”.  Let the GDS fight for their own destiny. Government may allow their right or not. This struggle is not the end of history. As long as injustice and discrimination are there, strikes and protests will emerge again and again likephoenix bird from the ashes.

Now the ball is in the court of the Government and Postal Department. It is they to decide how to play. What is wrong in inviting the GDS unions for negotiation and in reaching an honourable settlement, instead of distributing pamphlet type appeals one after another? What is the mindset of the top bureaucracy of the Postal Board? Are they thinking like olden days feudal landlords and expecting the GDS Union leaders “to obey them and not to question them”. Sorry, they are thoroughly mistaken and they should understand the writings on the wall. Only mutual trust and goodwill can build confidence in the mind of striking GDS and that can only lead to an amicable settlement.

We hope that good sense will prevail upon the powers-that-be. We want to make it clear that any attempt to break or crush the strike by attempting to victimization or any other coercive methods will only complicate the situation and the entire Central Government Employees will be forced to come out to defend and protect the striking GDS at any cost.

Posted by AIPAOEU.NFPE at 11:34 PM No comments:

Federal Secretariat meeting of NFPE has been held on 16-05-2018 at NFPE office, regarding ensuing strike of GDS employees under the leadership of comrade Pandurangarao, NFPE, GDS. The following decisions have been taken:
1) From 22nd May and onwards, all employees of the Postal Department will hold demonstration at lunch hour wearing black badge to extend solidarity in favour of the striking GDS employees. It is requested to go through the NFPE website regularly for any updation in this regard.
2) Postal JCA with FNPO has been revived. At the call of the PJCA demonstration at lunch hour wearing black badge will also be observed on and from 22nd May onwards.

With revolutionary greetings,
Umasankar Chakraborty
General Secretary
Posted by AIPAOEU.NFPE at 5:19 AM 3 comments: